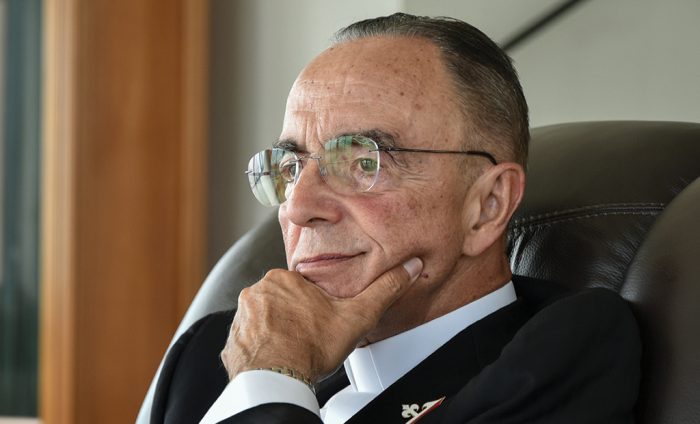 On August 15, 2019, Monsignor João Scognamiglio Clá Dias, founder of the Heralds of the Gospel, turns 80. Naturally, one who reaches such a milestone casts an analytical eye over the past and ponders the fruits of such a long existence.

In the life of a virtuous man, the phases of life should be added and not subtracted, said Professor Plinio Corrêa de Oliveira, master and inspirer of Msgr. João.

This is to say that as people advance from one stage to the next, they ought to conserve the treasure accrued from the previous stage. Therefore, upon leaving childhood and entering adolescence, they are responsible for preserving the treasure of innocence in their soul, and conserving it until the end of life.

To innocence should be added the vitality and generosity of youth. Nothing from the past is lost; rather, it is added to.

In the advanced age of the seasoned man, who has consumed his life for a great ideal, his bodily strength may be spent, but his soul will remain as strong as ever, enhanced by the virtues and gifts acquired at each step. Tempered by suffering, he will always stand ready to undertake new feats, with the wisdom of many years and the strength of the young.

This perspective lends insight into the life of Msgr. João Clá and the work that he accomplished with the founding of the Heralds of the Gospel and the family of institutions that have issued from it: undoubtedly, the most important being the priestly branch – the Society of Apostolic Life Virgo Flos Carmeli, and the Feminine Society of Apostolic Life Regina Virginum.

Monsignor João is a seasoned and universal man. Attuned to the action of the Holy Spirit, he centred his apostolate on youth, without neglecting any other social or ecclesial reality.

As he reaches the 80-year mark, is it possible to condense into a few lines, all that he has done, and especially all that he is?

“You are a letter from Christ” (2 Cor 3:2), St. Paul teaches. To paraphrase the Apostle to the Gentiles, it could be said that Msgr. João is a musical score of God, composed by the Holy Spirit and embellished by the sweetness of Mary, of whom he is an ardent devotee.

A musical score evokes harmony, and harmony is an appropriate starting point for understanding who he is and what he has done.

A consummate musician, he founded choirs and orchestras and was the inspirer of many others worldwide. His talent for conducting souls is no less brilliant, as his actions during one of the most difficult moments of his life prove…

In the late 1990s, during the internal division of the TFP – Tradition, Family, Property –, after the death of Professor Plinio Corrêa de Oliveira, he adeptly harmonized hundreds of souls and led them in a masterly way to an even more intimate union with the Holy Church of Christ

This did not pass unnoticed by the See of Peter, which, during the pontificates of John Paul II and Benedict XVI, granted pontifical approval to the three Works born from his heart: the Heralds of the Gospel, the Clerical Society Virgo Flos Carmeli, and the Feminine Society of Apostolic Life Regina Virginum.

Benedict XVI also awarded him the title of honorary canon of the Papal Basilica of St. Mary Major, in Rome, and Protonotary Apostolic. He also granted him the Pro Ecclesia et Pontifice Medal.

The artistic flair of Monsignor João is exhibited in two basilicas located in the Greater São Paulo region. He inspired their style, and oriented all of the details during their construction. He has done the same with over ten other buildings and churches spread across various countries.

A Doctor of Theology and of Canon Law, his speculative and practical intellectual legacy can be appreciated through his published books and articles, the magazine that he created, as well as through the numerous elementary and secondary centres of learning, a Higher Institute of Religious Sciences and a Philosophical and Theological Institute.

Throughout the pages of the five-volume collection The Gift of Wisdom in the Mind, Life and Work of Plinio Corrêa de Oliveira, we find proof that Monsignor João is the most authoritative and faithful interpreter of the thought of this distinguished Catholic thinker and leader.

He has also written the biography of the mother of his inspirer, Dona Lucilia. In its preface, Dominican theologian Fr. Antonio Royo Marín leaves the final judgement with the Church, yet affirms that “it is on a par with the finest lives of the Saints.”

The books and articles that he has penned on Our Lady “breathe” his ardent devotion to Her, without overshadowing the solid Christology of his seven-volume collection New Insights on the Gospels.

A charismatic evangelizer and fiery preacher, he has drawn young people to the service of the Holy Church. And, with a view to the sanctification of temporal society, he created a sector of Cooperators of the Heralds of the Gospel.

His desire to conquer the world for Christ and His Church prompted him to create the Knights of Mary and other missionary groups with broad fields of action for announcing and spreading the Gospel of the Kingdom.

His zeal for the needy stimulated the creation of the Mercy Fund, joining forces with the heroes of Christian charity in giving food and drink, in visiting the sick and the imprisoned, in clothing the naked and sheltering the homeless.

Accomplishments such as these can only spring from hearts that pray and suffer. The spirit of prayer of Monsignor João urged him to open chapels for perpetual adoration of the Blessed Sacrament.

From this source, he draws strength to bear the crosses that God sends him with resignation and Christian hope. And he joyfully offers these crosses for the expansion of this apostolate worldwide.

What more can be said?

The disciplined and strong spirit of the Christian knight blends harmoniously with a warm fatherly heart. Once, to a young deacon nearing his priestly ordination, Monsignor João recounted an episode from the life of Dom Bosco…

This Holy Founder took a handkerchief and scrunched it in his hand, then turned to the soon-to-be-ordained Michael Rua and said that he wanted him to be just as docile in his hands.

Familiar with the weakness of the sons that God confided to him, Monsignor preferred a different method. First, to iron out the creases of the handkerchief, then to fold it and perfume it, and finally, to say to the young ordinand, “This is how I want you to be in the hands of Our Lady!”

Monsignor João has also experienced the fulfilment of the mysterious words of the Gospel: “You will be hated by all for My name’s sake” (Mt 10:22), but thanks to his union with Our Lord Jesus, he forgave from the heart: “As the Lord has forgiven you, so you must also forgive” (Col 3:13).

Finally, a question arises. How is it possible to have done so much in so little time?

The secret to a fruitful life lies in prayer, in suffering, and in interior life. At 80 years of age, Monsignor João has reached a plenitude. He lives the sum of ages that enables him to combine the activeness of youth with the prudence and wisdom of a man of advanced years. As founder, he transmits these gifts to his entire work.

This is what explains the growth of the Heralds of the Gospel.

But what may the future have in store?

With the aid and protection of the Blessed Virgin, despite so many obstacles along the way, there is reason to hope for everything, to dare everything, and to fear nothing, except sin. Our Lady will bring the work born from her virginal hands to a good end.

In conclusion, without being hasty or rash, we could say that Monsignor João is just starting out…

Back to the site